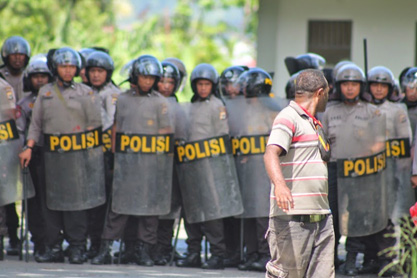 A total of 264 people were arrested by Indonesian security forces in West Papua on May 1st, including Mrs Pangkrasia, Leader of the Peoples parliament in Merauke and national spokesman of the KNPB Bazooka Logo.

264 PEOPLE IN ACTION Captured by Indonesian police during REFUSE annexation of West Papua protest 1 May 2015.

Dissolution forced by Indonesian military and police from 30th to 1 May 2015 in Papua and the data that is managed in the 264 victims gathered by the central KNPB.

Regional police throughout under instruction of Indonesia police chief in the land of Papua forcibly are forced to disperse demonstrations.

Police also catch about 264 people in several areas, among others.