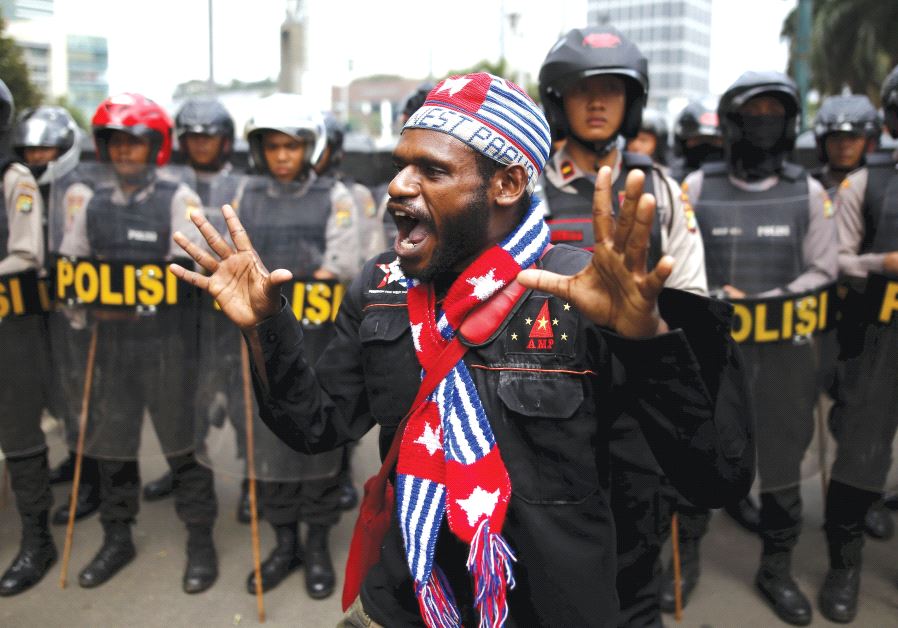 Papuans are among the most vulnerable members of the human race, some whose only encounter with “foreigners” has been marked with violence, oppression and hatred. An activist shouts near a police line during a rally to commemorate the West Papuan declaration of independence. (photo credit:REUTERS)

As a Jew living in the UK, I have always been frustrated but also curious as to this country’s disproportionate treatment and coverage of the Israel-Palestine conflict. My moment of “enlightenment” was during the civil war in Sri Lanka at the turn of the century. Thousands of Tamils were being tortured and killed by the Singhalese government. I recall watching a demonstration outside the Sri Lankan embassy on TV. There could not have been more than 50 people there (mainly ex-pats). The next day I was walking around the West End of London and came upon an anti-Israel demonstration. There were tens of thousands (a mix of all races and faiths) protesting a recent Israeli retaliatory bombing mission that destroyed some houses and killed three people.

I started researching other global conflicts and human rights concerns that were being marginalized and ignored due to the power politics in the United Nations and the media’s infatuation with Israel. Partly due to this as well, during a stint living in Australia I became involved in the movement for self-determination for the people of West Papua.

One of the most brutal ongoing genocides barely registers a blip on the global radar. How many have even heard of the West Papuan plea for freedom?

West Papua covers the western half of the island of New Guinea just 250 km. north of Australia (the independent nation of Papua New Guinea covering the eastern half). Colonized for hundreds of years, in 1961, West Papua was promised independence by its former Dutch colonists. The international community handed administration to the UN and signed the New York Agreement in 1962 promising to provide a referendum allowing Papuans to determine whether they wanted independence or union with Indonesia.

However, in 1963 West Papua was taken over militarily by Indonesia and illegally occupied.

During the so called “Act of Free Choice” in 1969, the Indonesian government claimed that West Papuans were too “primitive” to cope with democracy and handpicked just 1,026 West Papuan elders and forced them at gunpoint to vote in favor of integration with Indonesia.

The West looked away even though the UN observers conceded that the individuals were placed under duress and forced to vote yes to annexation.

It was the time of the Cold War, with Indonesia tilting toward the Soviets, and it was deemed that appeasing Indonesia was more important than self-determination for the people of West Papua. There was and still is the matter of the rich natural resources in the region, including one of the biggest gold mines in the world which is still subject to an extremely profitable partnership between the West and Indonesia.

Since 1963, an estimated 500,000 West Papuans have died at the hands of the brutal Indonesian occupying forces, accounting for more than 25% of the population. These numbers have been ratified by several studies and human rights groups (including The International Association of Genocide Scholars and Yale Law School). Daily killing, torture and imprisonment without trial by the Indonesian military and police carries on with no consequences and little condemnation.

While the Indonesian government continues to brutalize and persecute any West Papuan that calls for freedom, many bravely continue to do so. Despite this, little is reported by the press or appears in the international media.

Unfortunately, for Papuans, their oppression sits at the heart of international power politics, which Israel can also claim to be a victim of.

Indonesia is an important member of the powerful 57 country-strong Organization of Islamic Cooperation, a nation strategically important for the West and one which the British government claims shares “common interests and values.”

Indonesia is a staunch supporter of Palestinian rights and refuses to recognize the State of Israel. The hypocrisy is preposterous.

The leader of the Free West Papua Organization, Benny Wenda (currently living in exile in the UK), says, “How can Indonesia support Palestine’s independence and sovereignty, while the Papuan People are still colonized by Indonesia? How can Indonesia actively be involved in the peaceful settlement of the Palestine question at the UN, while it is rejecting any form of peaceful settlement of the political status of West Papua?”

Papuans are among the most vulnerable members of the human race, some whose only encounter with “foreigners” has been marked with violence, oppression and hatred.

When considering the number of Papuan victims of the Indonesian regime, is it right and just that the people of West Papua are being ignored as their cause is not politically convenient, doesn’t sell papers or wins votes (as clearly the Israel-Palestine conflict does and will)?

All that is left is for good people to say enough is enough and call on international bodies, human rights organizations and politicians place it on the global agenda.