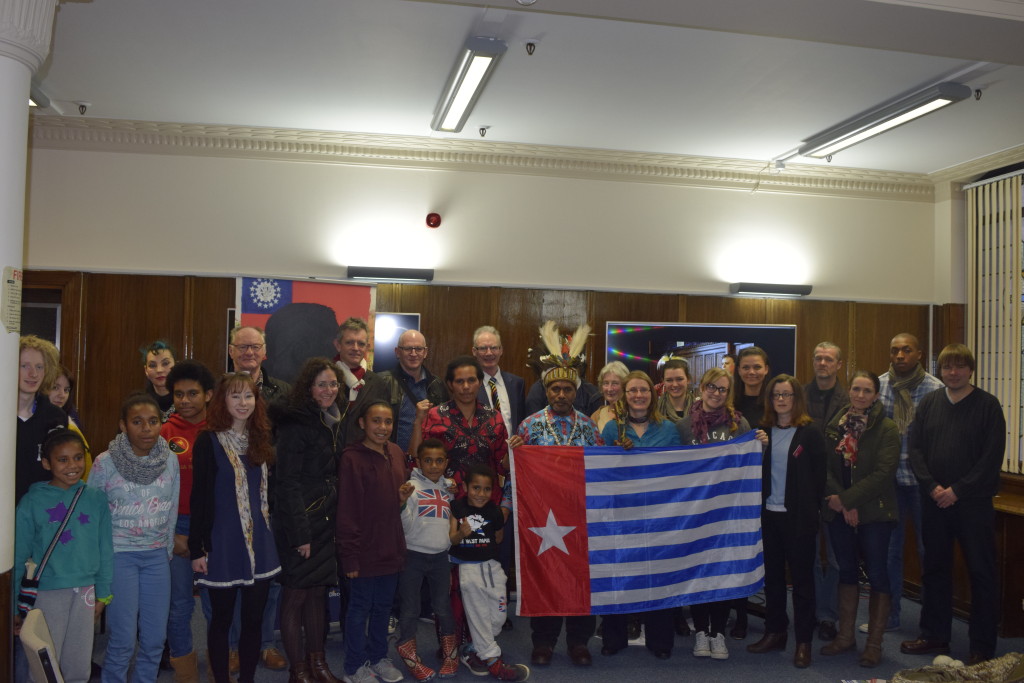 On 6th February, there were many Free West Papua Campaign events held in the city of Newcastle, United Kingdom. Activities at the Discovery Museum

Benny Wenda was also invited to speak at at the Discovery Museum in Newcastle City where he met with Paul Piercy, a renowned UK artist whose art exhibition, ‘The Black Portraits’ was on display. The Black Portraits features some of the worlds’ most inspirational Prisoners of Conscience and Human Rights Defenders who have been imprisoned or otherwise targeted by oppressive regimes. Among those painted by Paul Piercy was Filep Karma, West Papua’s most well known political prisoner who was jailed for 15 years just for raising the West Papuan national flag and only released in November 2015.

The Human Rights Defenders featured in the Black Portraits such as Filep Karma are painted in black to show that they have been silenced by now that Filep Karma has at last been released, Paul Piercy looks forward to painting him in full.

At the Museum, there was also an screening of the documentary film ‘The Road to Home’ which follows the life and struggle of Benny Wenda to liberate his people from colonial rule. The film screening was well attended and following this, Benny Wenda gave a talk about the West Papuan freedom struggle to the audience and took questions. All those who attended were very interested in the movement and in what they could do to help West Papua to be free.

Then in the evening, a Free West Papua benefit event was held in the centre of Newcastle which West Papuan refugee band, the Lani Singers performed at and spoke of how they were happy to spread the message and sing the freedom songs of their people, now banned by the colonial Indonesian government. Other bands also performed at the venue with the West Papuan flag at the backdrop, including local bands, The Whippet Beans and Monkey Puzzle. The crowd were very moved at the passion and spirit of The Lani Singers and their evocative cries for freedom, and were very interested in showing support for a Free West Papua. Our thanks to supporters

The Free West Papua Campaign is very grateful for all the tremendous support recieved and would like to thank all the people of Newcastle and all those who helped with the activities over the weekend. Special thanks to Chi Unuwah MP, as well as artist Paul Piercy, all bands who performed at the benefit event and everyone else who helped.

This Campaign is growing all around the world and raising more and more support and awareness for West Papua everyday! Once again, a massive thanks to all our supporters in Newcastle and around the world.

One day West Papua will be free!

Tags: APPG, Art, Benny Wenda, IPWP, Lani Singers, Music, Newcastle, UK
Previous post "Accusations against Benny Wenda have no proof. The truth needs to be proven."
Next article President of the Churches: West Papuans without the military and police, can protect themselves