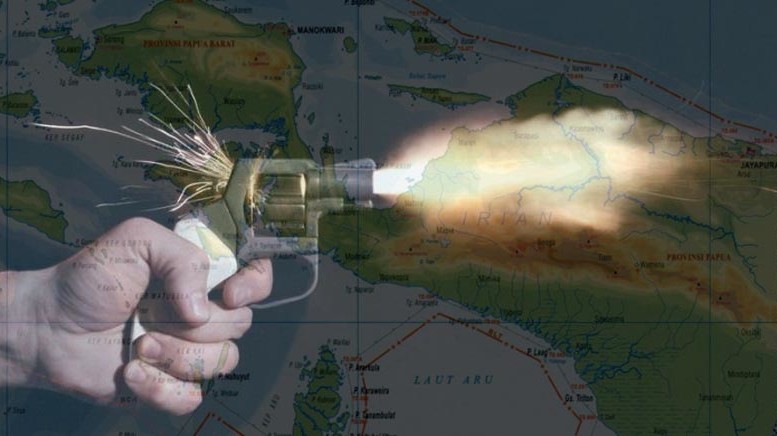 Yesterday my people once again witnessed the brutal murder and shooting of more West Papuan youths by the Indonesian authorities.
It is with yet more sadness that I and my people learned yesterday of how two 17 year old boys, Kaleb Bagau and Efrando Sabarofek were shot by the Indonesian police in Timika yesterday without any reason. Efrando, who was shot twice is now in hospital but Kaleb was shot dead instantly.

I want to send an urgent message to the world that West Papua has become a killing field for the Indonesian military and police.

According to recent information, the boys were simply sitting with their friends under a local tower when the Indonesian police arrived at the area and began to ask people “where are the messed up children?” Apparently someone told the police that the “messed up children” were here and that the boys “parents are part of the Free Papua movement.” Within 10 minutes, Indonesian police with 8 cars and 15 motorbikes pulled up and began raiding houses. It seems that Kaleb and Efrando were scared and ran into the street where they were then shot by the police. 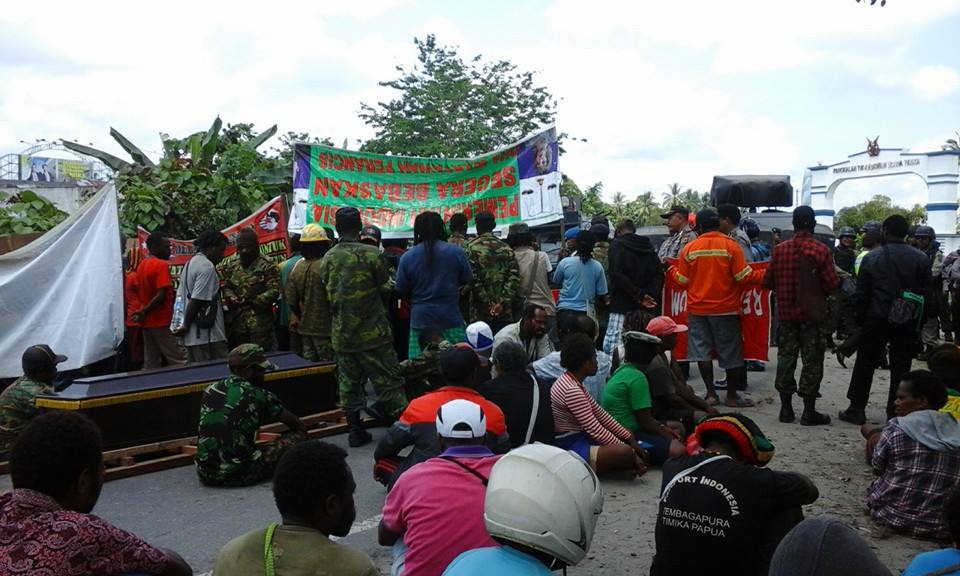 Today as people from the West Papua National Committee carried the body of Kaleb through the streets of Timika in his coffin, thef funeral procession was blockaded by This is another example of the Indonesian authorities having no respect for Papuans in life or death – they killed Kaleb Bagau as if he never existed.

How can the Indonesian police do this to our children and think they can get away with it?

It is exactly one month to the day since two other West Papuan youths were shot dead and up to 4 more injured by the Indonesian military in the same town of Timika. 5 more West Papuan children were also shot dead by the Indonesian military last December.
We West Papuans are always mourning over the murders of our people and yet always during our mourning more innocent West Papuans are being murdered. Recently 700 more Indonesian soldiers were sent to West Papua, adding to the more than 40,000 already stationed there. They are sent expressly to wipe out the Melanesian race in West Papua. My heart really cries at all the constant bloodshed and murder endured in this land.

Ever since Indonesia illegally occupied West Papua in 1969 they have never made any effort to bring to the perpetrators of any human rights violations to justice. Papuan lives are not just cheap under Indonesian rule, they are worthless. We are treated as if we do not even exist and there is always impunity for those that kill us. In the last 2 weeks, the Indonesian government made very suspicious claims that some West Papuans had kidnapped Indonesians and taken them into Papua New Guinea. The Indonesian government immediately identified who they claimed were responsible for the kidnapping and reportedly even prepared a military force with scores of soldiers ready to enter PNG.

We West Papuans know perfectly well that the Indoensian police, military, courts and government are working together to perpetuate the illegal occupation of West Papua with total impunity. When we are tortured, when we are shot, when our family members are killed, who can we go to? The police? They are the perpetrators. This horrible killing yesterday sickens and saddens us West Papuans to the core. Over 500,000 innocent West Papuan men, women and children have been killed by the Indonesian authorities and yet there has been no justice whatsoever. True justice will only come when West Papua is free.

We know that this constant cycle of Indonesian police and military violence is used as a tool to keep West Papua under Indonesian occupation. The Indonesian government is so scared of our international Independence movement, they are trying to torture, murder and terrify us into submission. We will never submit to Indonesia. After 50 years of illegal occupation, every new generation of West Papuans is only growing up with more and more sentiment to resist Indonesian colonial rule and to campaign for the freedom of West Papua.

My people have never been allowed to choose our own destiny. We have never had our fundamental right to self-determination fulfilled and as a result, the Indonesian government has felt free to treat West Papua as their own colony. The torture, rape, shootings and murder of the West Papuan people has continued ever since and Kaleb Bagau has become the latest victim of this ongoing genocide that has claimed the lives of over 500,000 people.

Therefore, I appeal to people and organisations all around the world, including parliamentarians, civil leaders and the media to please spread the message about the truth of what is happening in West Papua. We West Papuans desperately need the outside world to learn about our situation and spread the truth about our story.

I also call upon the leaders of our fellow Pacific Countries and the United Nations to continue to push for sending an urgent Fact Finding Mission to West Papua to investigate this ever worsening human rights tragedy. The situation in occupied West Papua is only getting worse and worse and we urgently need this fact finding mission to unravel the real truth of the atrocities before it is too late.

As my people continue to learn of more and more of these tragic cases with tears in our eyes and pain in our hearts; we hope so dearly that the international community will look to West Papua with sympathy and act to help us before the West Papuan people vanish completely.

We will not let the murder of Kaleb Bagau and the shooting Efrando Sabarofek be in vain. Their names are part of the proud but long suffering history of West Papua and they will always be remembered as 2 of the hundreds of thousands of victims of Indonesian state attacks and killings against us.

My deepest condolences and sympathies go with the families of these brave boys; may Efrando Sabarofek be healed and may Kaleb Bagau rest in peace. Together, we all say “No more killing. No more rape, no more torture, no more prison. One day we will be free!”

I would like to thank everyone around the world for all their ongoing support for the freedom of the people of West Papua.

My best wishes and regards to you all