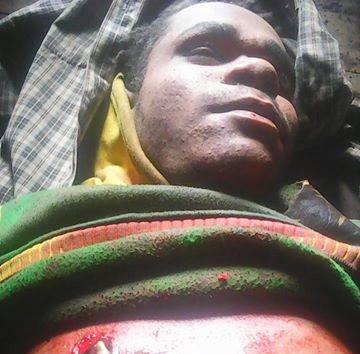 *URGENT NEWS*-Reports of another massacre of children in Paniai, West Papua.

According to reports, today one 15 year old Papuan boy was killed by the Indonesian police and military. Up to 11 others have been shot including 6 children. This apparently happened in Ugapuga village, Kamu Timur, in the Dogiyai Regency.

Photo: Yoseni Agapa, 15 years old and a victim of the attack. It was first uploaded by a local activist. We understand this is distressing.
http://www.kabarmapegaa.com/2015/06/tujuh-0rang-luka-luka-satu-orang-mati.html

The victims were apparently going home from school when a car came along and hit a local dog. In response, they asked for money from the truck which is believed was following the car.

Suddenly people from the truck wearing plain clothes started shooting at the victims and Yoseni Agapa (15) was shot in the chest and died. Julius Mote (16) was also attacked.

The Chairperson of the West Papua National Committee in Dogiyai, David Pigai is calling for justice and has said that people in the region were just praying and awaiting the results of the Melanesian Spearhead
Group but “faced murder by the Indonesian state.”

The victims are being treated at their families homes but there has been no known investigation into the shooting and according to local information, the perpetrators were Indoensian soldiers, police and others.

This is another horrible example of the Indonesian authorities brutal behaviour in West Papua and we send our full condolences and sympathy to the families of the victims.
Does the MSG really want to invite the perpetrators of these crimes into the Melanesian Spearhead Group?

Please visit www.freewestpapua.org/take-action to find out how you can help.