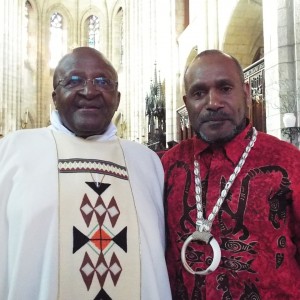 On 27th February 2015 Archbishop Emeritus Desmond Tutu met with West Papuan independence leader and founder of the Free West Papua Campaign, Benny Wenda, in Cape Town, South Africa. He has released the following statement renewing his call for the UN to instigate an investigation into the so called Act of ‘Free’ Choice in which Indonesia unlawfully annexed West Papua in 1969.

“I’m shocked to learn that West Papua is still not free. I didn’t think that things like this still happened. I call on the United Nations and all the relevant bodies, please, do what is right, as they know, for West Papua.”

“We can’t have some people in the world free and others not free. As long as there is one person not free, we are all not free.”

“I am very, very distressed and pray that Indonesia and other countries will do what is right, because it is not their (West Papua’s) gift, it is their right as the children of god.”

Next time I see you (Benny), you will have a West Papuan passport

In 2004 Archbishop Emeritus Desmond Tutu stated to the UN, “It is with deep concern I have learned about the United Nations’ role in the takeover of West Papua by Indonesia, and in the now-discredited “Act of ‘Free’ Choice” of 1969. Instead of a proper referendum, where every adult, male and female had the opportunity to vote by secret ballot on whether or not they wished to be part of Indonesia, just over 1,000 people were hand-picked and coerced into declaring for Indonesia in public in a climate of fear and repression.

One of the senior UN officials at the time, Chakravarthy Narasimhan, has since called the process a “whitewash”.

A strong United Nations will be capable of, among other things, acknowledging and correcting its mistakes.

I would like to add my voice to growing international calls for the UN Secretary General to instigate a review of the UN’s conduct in relation to the now-discredited “Act of ‘Free’ Choice”.”