SOUTH AFRICA – Today Free West Papua Campaign South Africa support freedom for West Papua and stand together with the people of West Papua because there is no freedom of expression, freedom of speech, and raise their on flag on their own land while we are in South African have freedom without fear and intimidation when we are raising the morning star flag on Saturday, 25 April 2015 in Port St John, Eastern Cape, South Africa.

Therefore our support to the people of West Papua who is being victimised by Indonesia because they are black colour as South Africa which was suffering under Indonesia colonial and little apartheid where on going genocide had taken place in West Papua. The flag raising and support West Papua self-determination from South Africa.

South African people will stand together with West Papuan against Indonesian brutality and on going genocide while “The people are crying because Papuans living in their forest are not free, while here in South Africa, in our forest, we are free to support from one village to another!”

We would like to thank you to chief Benny Wenda where visited South Africa for sought help where we had been threw this experience under Apartheid system. We will support West Papua to gain their independence and raising awareness entire South Africa. 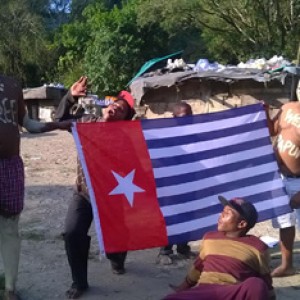