On 24th January 2017 the Free West Papua Campaign took another significant step in supporting West Papuans in their journey towards freedom: the official launch of the Global Petition for an Internationally Supervised Vote at the Palace of Westminster.

The ground-breaking petition is addressed to the Secretary-General of the United Nations, António Guterres, and calls on him to address the human rights situation in West Papua and to ensure West Papua’s right to self-determination through the vote.

The petition will play a significant part in West Papua’s journey towards independence by demonstrating the huge levels of support around the world for West Papuans to have the opportunity decide their own future. This will build on the growing diplomatic backing for a supervised vote, and is the vital step towards West Papua’s independence and the end of the genocide being perpetrated by Indonesia.

The Swim for West Papua Team joined Free West Papua and its supporters for the launch. The team are demonstrating their concern for, and solidarity with, the West Papuan people by performing an incredible physical feat; they will deliver the petition to the UN in August 2017, carrying it to its destination across the 69km length of Lake Geneva. 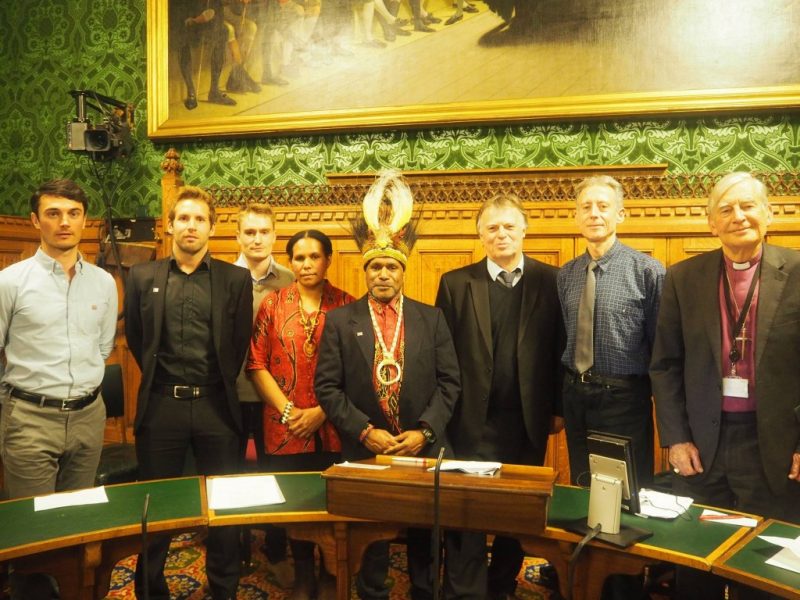 The event was chaired by Rt Hon Andrew Smith MP, co-founder of the International Parliamentarians for West Papua. Benny Wenda, Spokesman for the United Liberation Movement for West Papua, described how the swim will serve to highlight and promote the petition and called the West Papuan struggle a ‘human issue’, rather than soley a Melanesian or Pacific one. Benny concluded with a clear call to action: ‘West Papua needs you to support the swim: sign this petition and get as many people as possible to sign it too.’

Joel and Tim, members of the Swim for West Papua Team, spoke about feeling compelled to act to alter the situation in West Papua, and inviting others to be involved in ‘something bigger than all of us… it is time to stand with the people of West Papua and ensure that change occurs, that our weight, our energy, our efforts, never cease until an internationally supervised vote on self-determination actually happens.’

Moving messages of support from within West Papua were also shared at the meeting via video footage. These included a demonstration, bravely conducted in defiance of the Indonesian authorities by political prisoners in Timika, led by local West Papua National Committee (KNPB) Chairperson Steven Itlay.

Lord Harries of Pentregarth, co-founder of the International Parliamentarians for West Papua, shared a message of support from Archbiship Emeritus Desmond Tutu which decried the lack of media attention in the West devoted to West Papua. He also commended the Swim Team and called for solidarity with the West Papuan people: ‘we may live in different regions of the world, but we are one family’. Lord Harries then declared the petition open for signing.

Peter Tatchell, human rights campaigner, then spoke, encouraging West Papua’s supporters to sign and share the petition online. He quoted Martin Luther King’s words ‘The arc of the moral universe is long, but it bends towards justice’, adding that one day, West Papua will be free.

The event was a resounding success and marked the beginning of the petition’s journey to the United Nations. In years to come, by joining together the voices of so many of West Papua’s friends and supporters, the petition will be an important thread, woven into the story of West Papua’s successful struggle for freedom.

Previous post West Papua: UN must supervise vote on independence, says coalition
Next article The official launch of the Global Petition for an Internationally Supervised Vote at the Palace of Westminster.