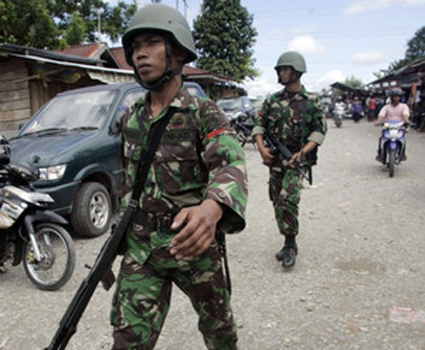 According to reports, an Indonesian solider allegedly stabbed the woman and children with a sickle late last month “after she ignored his romantic overtures”

The Indonesian soldier has apparently now been detained.
The military reported this news on Tuesday but why did they take a month to report it? We will try to find out more information about these shocking murders.

This is another truly horrific report from West Papua of the brutal murder of a mother and her children. We fully condemn all these evil actions and demand that the perpetrators be brought to justice.

Such terrible acts of evil show what the Indonesian military is really doing in West Papua. How can they be allowed to get away with this?

The Indonesian military MUST leave West Papua. They must bring this horrific genocide and illegal occupation to an end and give back West Papua to the West Papuan people.

Rest in peace those who were murdered. We will not stop until full freedom and justice comes to West Papua at last.