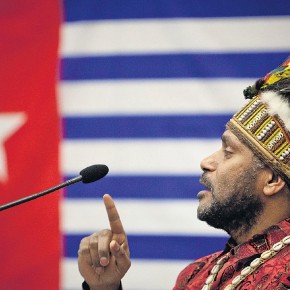 ON AUGUST 15, a group of protesters will descend upon the Indonesian Embassy to contest the Southeast Asian country’s sovereignty over the region of West Papua.

Leading the charge will be Benny Wenda, spokesperson of the United Liberation Movement for West Papua.

His journey to the frontline of the independence movement is one of a battle, quite literally, for survival.

That he is still around to tell the tale means he is able to lift the lid on a 21st Century genocide few people are aware of.

To date, campaigners estimate 500,000 West Papuans have been killed by Indonesian officials as they maintain their hold over the disputed territory.

Wenda, now living in exile, was granted political asylum by Britain in 2003 following his escape from custody while on trial in West Papua for crimes he says he did not commit.

Making it out alive was “a blessing”, he says, but has vowed to make his freedom count for something.

West Papua was a former Dutch colony previously called Irian Jaya. It had been preparing for independence when Indonesia asserted its claim in 1962.