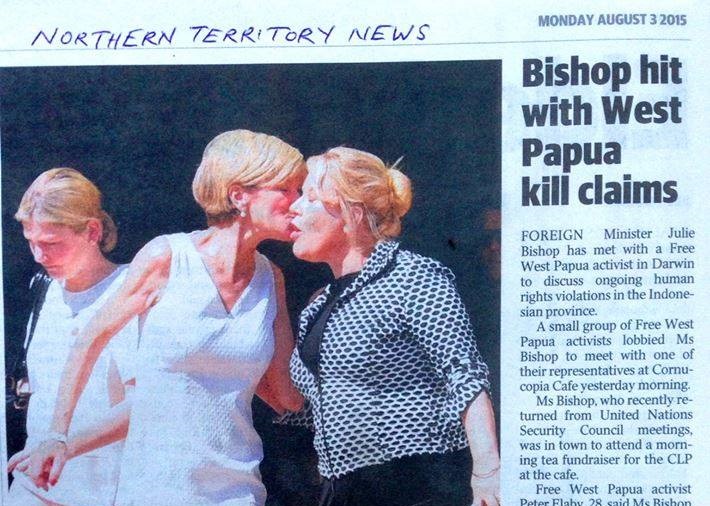 FOREIGN Minister Julie Bishop has met with a Free West Papua activist in Darwin to discuss ongoing human rights violations in the Indonesian province. A small group of Free West Papua activists lobbied Ms Bishop to meet with one of their representatives at Cornucopia Cafe yesterday morning. Ms Bishop, who recently returned from United Nations Security Council meetings, was in town to attend a morning tea fundraiser for the CLP at the cafe. Free West Papua activist Peter Elaby, 28, said Ms Bishop agreed to meet with him for about 10 minutes after several negotiations. Mr Elaby was exiled from West Papua in 2013 and later became an Australian citizen. “I asked Ms Bishop about how the Australian Government can solve the human rights issue in West Papua,” Mr Elaby said. “I wanted the Australian Government to see West Papua as our next door neighbour. “I want Australians to see what’s happening there in terms of the human rights violation the Indonesian government has committed with genocide in West Papua. “I want Australia, as a developed country and a member of the United Nations Security Council, to keep the peace in the Pacific region.” Mr Elaby said the minister listened to his concerns and remained diplomatic during the meeting.